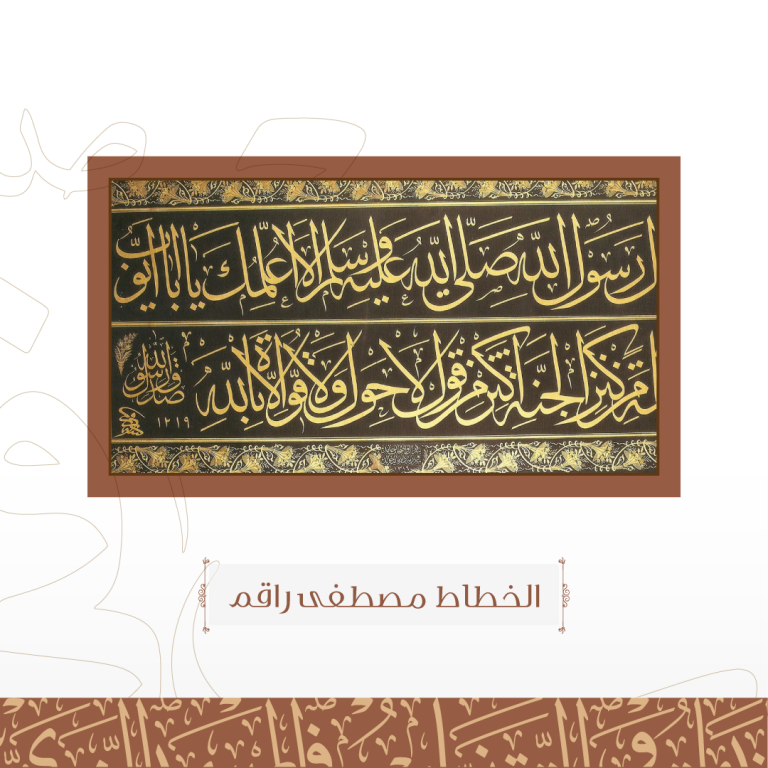 He studied painting and calligraphy in Istanbul. He learned Thuluth and Naskh through his elder brother Ismail Zuhdi Afandy, and then from Darwesh Ali Afandy who was a student of Ahmed Hefzy Afandy.

Rateb Afandy, senior calligrapher introduced one tableau handwritten by Raqm Afandy to Sultan Selim III. He liked it, and granted him title of teacher, then he became the painter of Humayun coins, then he became a calligrapher of Tughra for Sultan. He has been assigned as a teacher for Sultan Mahmoud II to learn him calligraphies.

He mastered Thuluth and Naskh perfectly. At the same time, he also mastered Ta’liq. In addition to calligraphy arts, he was a qualified painter. He mastered all these arts very well, and he was highly appreciated for that.

Thuluth Jali is one of the most beautiful scripts he handwrote on Nusretiye mosque in Tophane area in Istanbul. These calligraphies are of the ageless monuments for Raqam.

There is Prophet Mohamed Hilya written by Mr. Mustafa Raqam which considered one of the most precious and beautiful Hilyas. Sami Afany Aoura Nous Zada, one of the great fans of calligraphy art said: “the large tableau fixed inside Hagia Sophia is one of the most beautiful calligraphies which calligraphers admired and fascinated about”

Mustafa Raqam constructed a Sebil (fountain) near to his house. He handwrote calligraphies on that Sebil himself using Ta’liq script. Although he didn’t interest in Ta’liq script too much like Ezzat Afandy, but he proofed his proficiency and showed skills in these handwritings.

Mustafa Raqam Afandy had passed away in 1241 AH/ 1826 AB and has been buried in Fatih area in Istanbul.