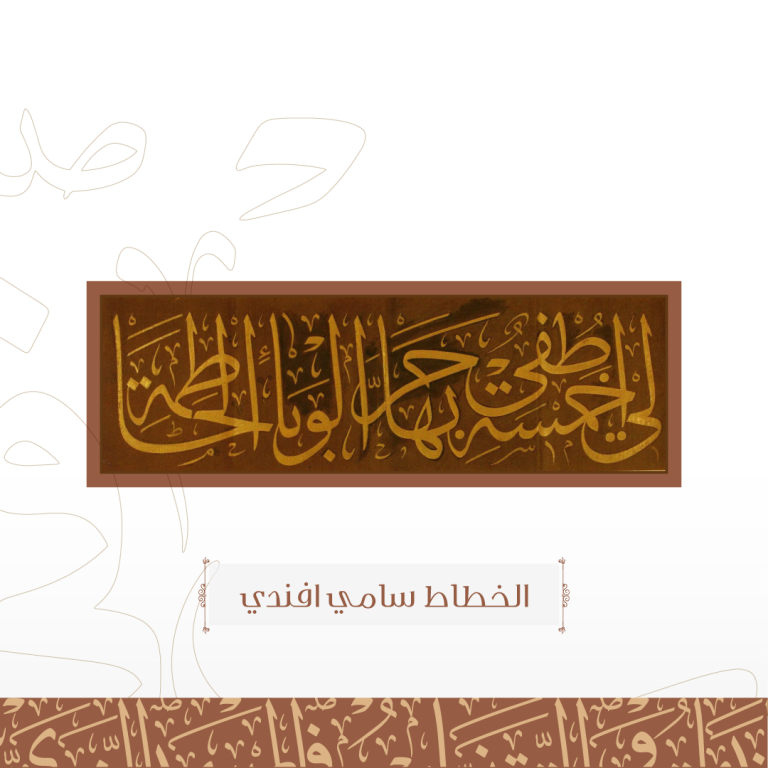 
He had born in Istanbul 1253 AH – 1838 AB. He knew both Arabic and Persian languages as well as his native language. He studied Ta’liq script through his teacher Zada Esmail Heqi Afandy, Jali Ta’liq through Ali Haider Bey, Thuluth and Naskh through Othman Afandy ELbeshnaqi, Jali Thuluth through Rajai Afandy, Diwani, Tughra, and Jali Diwani.through Naseh Afandy and Ruq‘ah through Mumtaz Afandy.

He mastered all scripts and was using pencil. His written letters looks like as being written with Cane Pen in terms of accuracy and balance.

He tracked and followed Mustafa Raqm in dealing with letters and scripts, especially Jali script. by spending long times up to years in correcting, observing and examining scripts to produce the best tableaus. He was fully aware of Yasari Zadah style in Jali Ta’liq and he perfectly mastered it. Then, he used Esmail Elzuhdi’s style (elder brother of Raqm).

He has handwritings engraved on stones including those on ablution room and Sebil (fountain) of Yeni Cami Mosque. These handwritings consist of 12 lines which was a guide for the next generations of calligraphers. He has also handwritings on the gates of Grand Bazaar (Kapalıçarşı) and Naili Mosque in ELbab Alali and other mosques.

He studied calligraphy in Divan- Hümâyûn (Imperial Council), Andron school, and in his house by himself. His students include Mohamed Nazeif Bey, Hasan Reda, Ahmed Kamel Aqdayk and others.