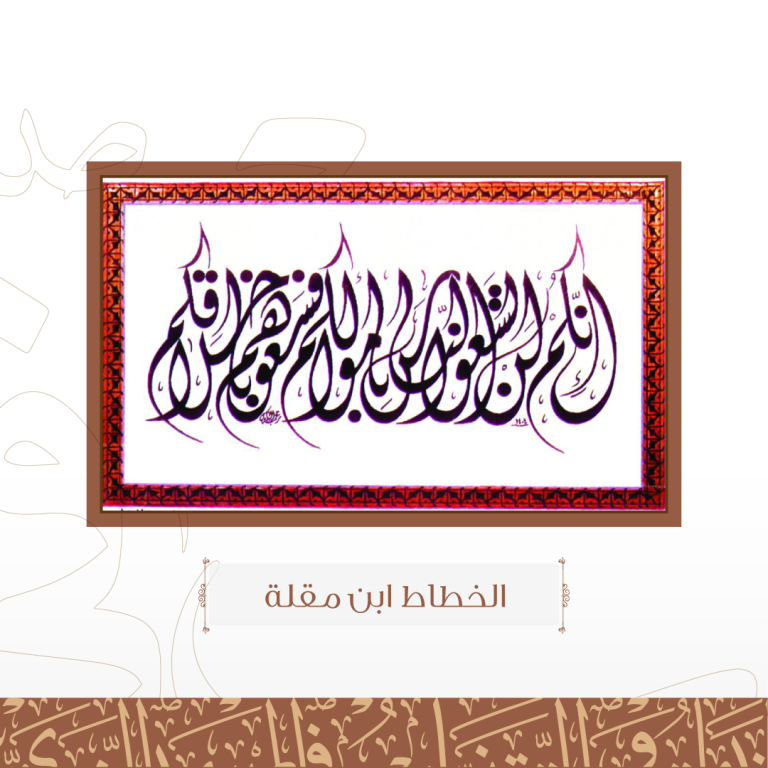 
Abu ‘Ali Muhammad ibn ‘Ali ibn EL Hussian ibn Muqla al-Shirazi (272AH – 886AB/ 328 AH – 939 AB) was one of the official calligraphers of the Abbasid Caliphate. He was the first one who placed written foundations for Arabic calligraphy. It is thought that he was the inventor of Thuluth. All his traditional works have been effaced.

He has provided may artistic and important achievements for the science and art of Arabic calligraphy that can be phased shortly as follow:

Study and foundation: Muhaqqaq and Reyhan scripts have been largely used before Ibn Muqla era. He was able to restrict the styles which exceeded 20 styles to be only 6 scripts; Thuluth, Naskh, Tawqi, Reyhan, Muhaqqaq and Reqa.

One of his most common sayings about scripts: Calligraphy has many styles and scripts that people have been learned and taught to their children. By the time, they started to ignore this science exactly as happened with other sciences and industries. The most common script was Thuluth which used to write registers and books authored by scholars. It called Registration script, then bold Tomor and Shami that were used by the kings of Umayyad Caliphate.”

For specific aesthetic features, Naskh script was the most important discovery in Ibn Muqla life. He has placed the first rules and foundations for Arabic calligraphy which followed then by senior calligraphers. He has placed the instructions thereof in a found message attributed to him called “Message Of Calligraphy Science And Pencils” which included his style in writing the independent Arabic scripts. He divided his message into sections including: inks, pencils, sharpening pencils for each letter/script, considering letters, holding pencils, mentioning letters, the best styles for each script. This Message included explanations and descriptions for all styles of scripts from a to z.

In addition to, he improved Naskh script aesthetically and added improvements to Kufi script and developed Thuluth. It is said that he had placed 12 rules for the aesthetic composition and structure of Arabic calligraphy.

He wrote the Holy Quran two times. Some scripts called Muqli as he theoretically drafted and formed its structure, motion, and geometry.

The most known students of inb Muqla are Ibn Al-Bawwab who gained such timeless reputation and famousness for mastering the script which Inb Muqla used, Abū Hayyān al-Tawhīdī, and Yaqut al-Musta’simi.