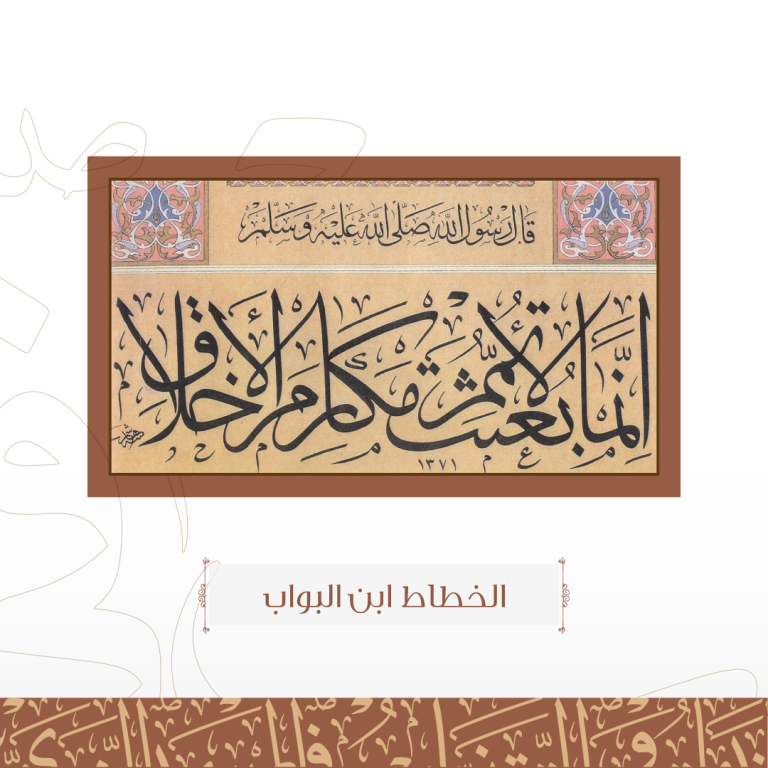 
Abu Al Hasan Ali Ben Helal, known with Ibn Al-Bawwab (350 AH/961AB – 413 AH/ 1022AB). Ibn Al-Bawwab grew up in Baghdad and worked as painter for walls and ceilings of houses. Then he worked in manufacturing seals before working and mastering calligraphy. Finally, he mastered Arabic calligraphy which he inspired by the students of Ibn Muqlah, Mohamed Ben Assad, well-known calligrapher and Mohamed El Semsmani. All the earliest calligraphers have become famous in calligraphy, but he mastered and headed.

The factor by which Ibn Al-Bawwab gained such reputation is mastering the script that previously invented and mastered by Ibn Muqla. It had been narrated that he was ‎simulating the ambiguities and complications of Ibn Muqla script when Bahaa Eldawala library assigned him a classification mission of the Holy Quran parts which previously written by Ibn Muqla. These parts were dispersed between other calligraphies inside this library. He discovered 29 ajzā (part), but unfortunately he didn’t find the last Juza (part) even with deep and continuous search. Therefore, the prince assigned him the mission of simulating the last missed part exactly as Ibn Muqla wrote other parts. Ibn Al-Bawwab started writing this last part of the Holy Quran with a promise from Bahaa Eldawala of a valuable consideration if he fails in differentiating between the simulated or copied part and other original parts. Ibn Al-Bawwab spent one year to write the lost part, and present it to Bahaa Aldawala who carefully checked this part and couldn’t differentiate between the original one and copied one. He used Thuluth and slight Thuluth perfectly and mastered Reqa and Reyhan scripts. He used different scripts for the Holy Quran and normal texts and wrote with Kufi script. Mohamed ben Abd Al Malk learned from Ibn Al-Bawwab. Gmal Eldin Yaqut al-Musta’simi and Kamal Eldin Ben Al-Adeem are followers of Ibn Al-Bawwab. He has written 94 copies of the Holy Quran. Only one is still there which he wrote in Baghdad in 391 AH and kept on Chester Beatty library in Dublin, Ireland. He illuminated and golden this copy in a way that looks exactly like the one written by Inb Muqla himself. It is a purely work by Ibn Al-Bawwab!

He has written a poem called Raihet Ibn Al-Bawwab in calligraphy and pencils. It talks about the tools of writing. He was highly appreciated till he passed away in 413AH /1022 AD.