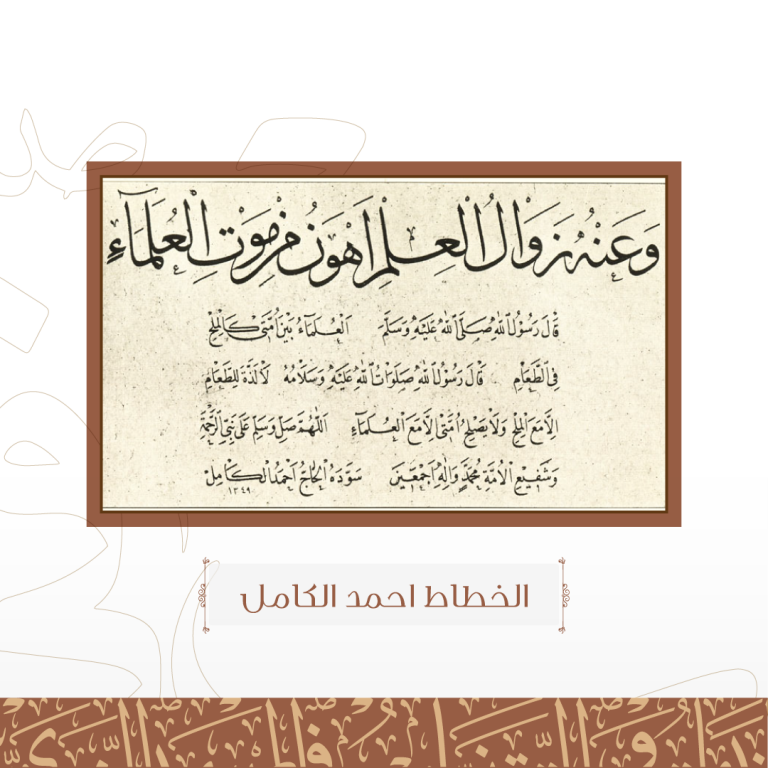 
Ahmed Kamel is one of the most qualified calligraphers who handwrote Arabic calligraphy. He had born in Istanbul in 1862.

He early learned in Sultan’s School, and then he knew Sami Afandy, senior calligrapher who was so famous at that time. He was going to his house. Sami Afandy appreciated and praised Ahmed Kamel who has been affected by his qualified teacher. Every time he remembered him, he was saying “Thanking to my teacher –May Allah rest his soul in peace- I learned what I gained in Arabic calligraphy”.

He has been trained using his teacher exercises. Sometimes, he was carefully examining and analyzing calligraphies of the senior calligraphers to detect secrets. He was spending the remaining time in discussions and asking about calligraphy and calligraphers. By the time, he mastered Jali Thuluth, Naskh, Diwani, Tughra, and Jali Diwani.

He used to go to the writers Souq to buy whatever he finds there of calligraphies of old calligraphers whether it is expensive or cheap, then examine it carefully to find out its secrets, then trying to imitate its letters and scripts in scientific way.

He handwrote his tableaus creatively. Now, it is considered as important references and exceptional examples of Arabic calligraphy. Then, he became a well known calligrapher, so he started to teach Arabic calligraphy for beginners inside his house.

He has been titled with the Head of Calligraphers in Sultan Court for mastering and accuracy in Arabic calligraphy. Although, there were senior calligraphers at that time, he was assigned to teach Arabic calligraphy in Galatasaray school. He continued teaching in Calligraphers’ school which later renamed with Oriental Decorations And Arts School. He worked at this time also as a teacher for Fine Arts Academy in Istanbul.

He was always imagining Naskh even when using other scripts. For being affected with this script, he was always prepared for writing the Holy Quran. Mohamed Ali Pasha invited him to make the handwritings for his Palace looking at Nile river in Manyal, Cairo.

His adoration to the Arabic calligraphy didn’t end till his life ended in 1941 AB – 1360 AH. He has been buried in Ayoup graveyard in Istanbul.